He's got a new website and a new album out, Beyond the Sun, recorded at Sun Studios. Looks like he's maybe gotten hip to owning the 1446... the logo on the site has a 1446 silhouette embedded in it, and there's a pic of him with his namesake guitar on the front page as well. Check the "Electronic Press Kit" video for "Beyond The Sun" below, and pay special attention to the scenes inside Sun Studio. Look closely, and you'll see a Silvertone in the arsenal, but it won't be the one you're expecting. 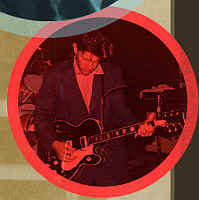 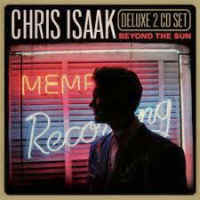 While you're toolin' around over at ChrisIsaak.com, check the full-size snap from the series that the image in the red circle above is taken from. Sure looks like a 1484 setup on the backline to me!

I can't remember the first time I heard Chris Isaak. I know I saw the album cover for Silvertone back in 1985, but like a lot of other folks, probably didn't get hip to the Isaak tip until "Wicked Game."

"The Chris Isaak Show" on Lifetime was absolutely hilarious. Why can't they get that puppy out on DVD? Chris (looking annoyed) said in an interview something like "There's lots of lawyers arguing in rooms wasting money."


Chris also had a great talk/music show on the Biography Channel, The Chris Isaak Hour.
What a concept: let your guest have the entire hour to talk about their music, perform some favorites and have a good time. A much better idea than the typical tacked onto the very last 3 minutes of the show "Here they are folks, we're out of time, good night!" slot that most musicians have had to put up with forever.

Here's some video of Chris:

Here's that famous one for 'Wicked Game.'

Here's the album that started it all; catchy name, too!

'Wicked Game' was on this one